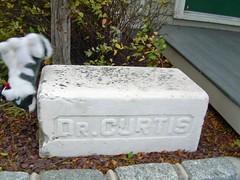 Yet another shot I got by accident. The story here is I was setting Plush Husky up on the marble horseblock in Hicksville on Sunday. The wind was very strong at that time so Plush Husky kept getting blown off the horseblock. Finally, I thought I'd gotten Plush Husky to stay put so I snapped a picture. At that exact moment, a gust of wind came by and so I caught it in mid-air! Actually, I didn't know I got this particular shot until I copied the pictures from the memory card later that evening.

On a different note, here are some pictures I took that were not by accident: FurFright 2006 photoset
Didn't get as many pictures this time around because most of the time, I was either in costume myself or not at the right place at the right time.

Not going to talk about geocaching or Where's George in this post, so how about some Bookcrossing? This book was just logged as found on Sunday. I left it at the Ramsey Train Station 11 months ago. So what I'm wondering is whether the book was actually sitting at the train station for 11 months or whether the finder picked it up a long time ago but only just got around to logging it at the Bookcrossing website. 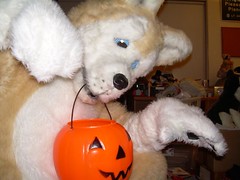 1. Received 2 silver quarters (years 1944 and 1946) in my change at CVS. That's quite a deal because the two coins are worth about $4 for their silver content! I'm surprised that people haven't been aware about the value and haven't picked those coins out of circulation. Also, since I got two silver coins together, someone may be going around spending an old coin collection.

2. Got a voucher for a free sandwich from Quiznos. I think it was from a promotional offer earlier this month that I signed up for.

3. Received two Postcrossing postcards, one from Brazil and one from Finland. Current total: 20 sent, 10 received.

Subway in Park Ridge didn't take a coupon that I got online. Boo! Of course, I didn't expect them to take it. Subway restaurants in this area are notorious for not accepting coupons, even coupons from the Sunday paper! Note, however, that Subway cannot require its franchisees to participate in coupons and promotions. That would be considered price fixing under Federal law. That's why restaurant coupons usually state in the fine print that the coupon is valid at "participating locations." So the Park Ridge Subway restaurant management is perfectly within its right to reject the coupon. On the other hand, they also need to be aware that since I'm such a coupon freak, their acceptance or rejection of coupons weighs heavily in my decision to go to that restaurant.

Anyway, I posted feedback on the coupon issue at the Subway website and a customer service rep wrote back to say that she'll forward my comments to the Subway regional office and to the restaurant owner. Meanwhile, for lunch, I went to Burger King, just across the street from Subway, to use my last BK coupon.
Collapse