Mascot gig today. Hi-4 was on the grounds of the Secaucus Public Library this afternoon to entertain visitors to the library mini-fair and book sale. Our group this time was Damian K,

antetfa, and I. I got there a little early but had to wait anyway because the changing area, which was a room adjoining the reference section, was being used for a meeting. Once they were done, we went in and changed into costume. 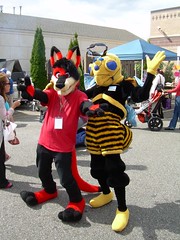 The fair wasn't a large event but we were kept busy interacting with kids and parents. A few kids were troublemakers but I didn't experience any tail-pulling, perhaps because

mister_f's kangaroo tail was bigger. :) The gig was roughly 4.5 hours. I did two sessions in costume for 1.5 hours at the beginning and an hour at the end. In between the two sets, I assisted. (mostly tried to stop the worst of the tail-pulling :) )

After the gig, we went to Linda Thai Kitchen, a Thai restaurant in Secaucus. We had to wait about 10 minutes or so because on weekends, this restaurant is only open for dinner starting at 4pm. I'm glad we went there. The food was good and the service was excellent! I had massaman curry with pork. After the meal, Linda gave us complimentary mini blueberry muffins. (In the photo, I used a penny for size reference.) Interesting.

On my way home, I made a stop in Ridgewood for the new In A (W)Holy Place geocache. That was a pretty quick one in the parking lot of a certain upscale supermarket whose name sounds like the cache name.
Collapse