On Saturday, I started out the geocaching spree in Fort Washington, Upper Dublin, and Horsham before heading way north to Plumsteadville, Ottsville, and Nockamixon State Park. As usual, for this area, most of the caches I found that day were by Taxman, who is now the top cache owner in my finds, as you can see in the chart below. He has placed over 940 geocaches, so far, and is still putting out new ones almost every day (apparently it's his new full-time occupation after retiring from the IRS :) ), so I'm a long way from finishing those.

While taking a side trail to "Past the Kohler Park dogs", I happened on a little fawn. I had no idea where its mother was and I was surprised it let me get within 15 feet and stood still long enough for me to shoot a few photos. 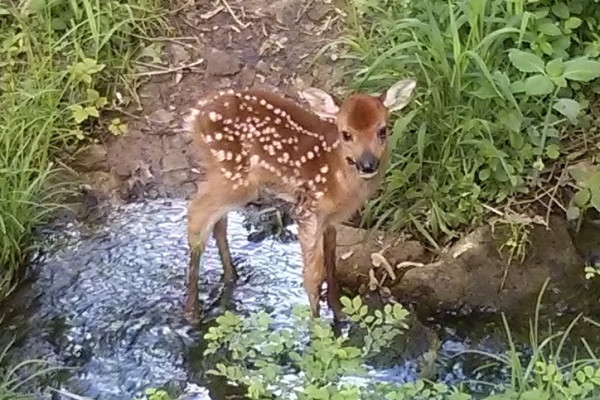 On Sunday, I went to Point Pleasant Beach to do a mascot gig with

jbadger and Damian for CFF Great Strides. Just as it was in previous years, this is a good event with a good crowd. Also, it wasn't raining like it was last year. Damian had to leave a bit early, but JBadger and I continued with the gig, had lunch at a nearby Chinese restaurant afterwards, and geocached along the Edgar Felix Bike Path. (EFBP cache series)